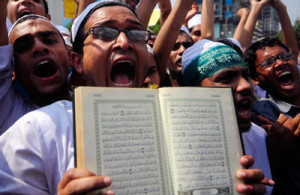 "Female concubines in Islam are not deemed human"

One of the few positive developments following the rise of the Islamists during the "Arab Spring" is that today many average and/or nominal Muslims are seeing the true face of Islam and its teachings. And many—as evinced by the June 30 Revolution of Egypt, which saw the ousting of the Muslim Brotherhood—don't want to deal with it.

For example, during a recent episode of "With Dr. Islam Buhira" on Al Qahira Wa Al Nass TV station, Buhira explained how he had attended "a conference in Morocco on the status of women in society post Arab Spring," and how at the conference, the following interpretation of the Koran by renowned Islamic exegete, al-Qurtubi (d.1273), was read: "Women are like cows, horses, and camels, for all are ridden." > MORE < 24