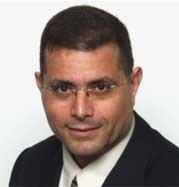 Senior researcher and analyst of the Middle East and radical Islam at the Jerusalem Center for Public Affairs; co-founder of the Orient Research Group Ltd. and is a former advisor to the Policy Planning Division of the Israel Ministry of Foreign Affairs.

Mr. Dahoah-Halevi serves as a senior researcher analyst of the Middle East and Radical Islam at the Jerusalem Center for Public Affairs headed by former Israeli Ambassador to the UN, Dr. Dore Gold and as a director of research for the Orient Research Group Ltd., a strategic and private information services company. Mr. Halevi is also a special consultant to the Terror Victims Litigation Project which represents US citizens harmed by terrorist actions in the Middle East. In addition he is a fellow at the American Center for Democracy and an analyst and contributor on Islamic terrorism and Arab and Middle East affairs at Sun News Network and alongside interviews to CTV, CBC, TVO and CTS.

Lt. Col. Halevi is a retired career Intelligence officer who specialized in research on Palestinian and
Islamic affairs. In 2003 – 2004 Mr. Halevi served as senior advisor for policy planning in the Israeli Ministry of Foreign Affairs.

During the last decade, Mr. Halevi has written numerous articles for both Hebrew and English
publications on the "Financial Jihad", the new radical Islamic thinking justifying the genocide of "infidels", the Hamas Strategy to usurp the Palestinian Authority and Palestinian policy regarding the peace process with Israel . In recent years Mr. Halevi challenged in continuous, intensive and thorough research allegations raised by human rights organizations and the Goldstone Mission against Israel.