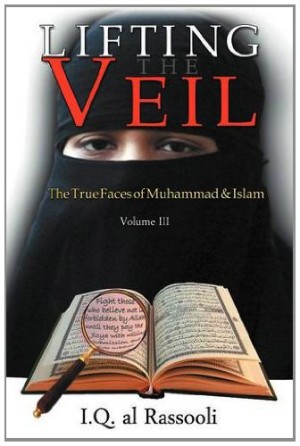 I Q al Rassooli (pen name) was born in Iraq. His mother tongue is Arabic. He was sent by his parents to study engineering in England.
After graduating university, he decided to stay because he found out that the teaching he had at home about other people was one-sided and wrong.
Because of the intractable turmoil of the Middle East, he took it upon himself to study the subject matters as thoroughly as humanly possible.
He spent almost 23 years –on and off – researching, analysing, comparing and contrasting as many points of view as possible hence had to learn a lot about Muhammad, the Quran, Hadiths, Arab and Islamic histories, Arab / Israeli conflict, the Hebrew Bible, the New Testament, Zoroasterian religion & Pagan Arabian religion.
For the following three years he put his thoughts in a thesis that no publisher in the UK (November 2000) wanted to touch because it was so radical and revolutionary.
They refused it because in the pre amble to the thesis he wrote (turned out prophetic):
"The greatest threat to human civilization in the forthcoming 21st century is not nuclear weapons but Fundamentalist Muhammadan Islam with or without Weapons of Mass Destruction"
9/11 bore him correctly.
Instead, he had a website created www.inthenameofallah.org  and put – so far over 780 chapters – covering almost every facet of Muhammad's depraved CULT Belief System.
He also put up over 300 audio/video chapters on YouTube ( Idiots' Guide to Islam) that the Muhammadans flagged them and You Tube – breaking their own guidelines – terminated all of them in an instant.
Luckily he had most of them backed up on his blog: http://www.the-koran.blogspot.com and www.alrassooli.com.
He also started what he hopes will be one of the largest movements called Ummat al Kuffar/ Nation of Infidels comprising 80% of humanity who are the would be VCITIMS of the followers of Muhammad:
All Christians, Buddhists, Hindus, Zoroasterians, Jews, Atheists, Animists, Agnostics, pagans etc. All those who do not believe as Muslims do.
He has so far been on 495 radio talk shows with the USA (no one in Politically Correct Europe would welcome him) and has had a Trilogy called :
Published Lifting the Veil: The True Faces of Muhammad & Islam (Volumes I,II,III) that utterly discredit Muhammad as a prophet and the alleged divine origin of his Quran based entirely on the Islamic 'holy' sources in chapter and verse.
His credentials are embedded in all of the above.
He says his mission is simple: "The complete exposure of the obscene FACTS & REALITY of what the media call 'Islam' based entirely on the very Arabic sources" and has over one million dollars' worth of challenges to every human being who can disprove any of his revelations (not a dime taken even after four years). 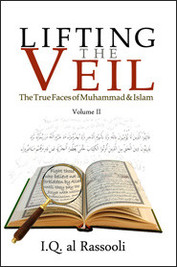 Book Description
Publication Date: June 11, 2012
This book is based upon our YouTube series "Idiots Guide to Islam", of Q & A chapters that are listened to. It is fully complimented, with more details on our web site "www.inthenameofallah.org"The purpose of this book is to enlighten, step by step, an otherwise IGNORANT immense majority of humanity among both the so called Believers & Unbelievers about the FACTS & REALITYof the Cult of Muhammadan Islam.All references are based entirely upon the Arabic language of the Quran, Hadiths, Arab & Islamic histories.It analyses almost every concept, precept, thought, idea, expression and relevant verse of the Quran and contains extremely controversial and unusual statements and conclusions.By the time one has either read this book or listened to the series, one will become so knowledgeable on the Quran, Hadiths, Arab & 'Islamic' histories, to such an extent, that never again would one be fooled, deceived or misled regarding these subjects