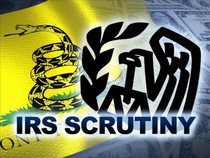 After the Citizens United decision, the president himself weighed in, expressing his outrage about the decision, indicating his intent to "develop a forceful response to this decision." The latest round of the IRS scandal, in which Tea Party and conservative groups have been selectively targeted for harassment by our tax collection agency, is now unfolding. This comes in the form of proposed new rules from the IRS regarding the operation of organizations falling under the 501c4 provision of the tax code. These are organizations whose purpose is to promote "social welfare" and therefore their income is tax-free. Because promoting a cause or agenda in our free and democratic country cannot be isolated from political activity associated with that agenda, such activity is permitted by 501c4 organizations, as long as politics does not become its main purpose. These are the rules of the game that have existed since 1959. But now the IRS wants to change the game. The new rules they propose expand the definition of "candidate related activity" so broadly - to include voter education campaigns and grass roots lobbying campaigns - and to forbid even the mention of a candidate in any context 30 days before a primary or 60 days before a general election - that it will make it impossible for these organizations to function. The IRS would like us to believe they are just trying to clear up some rules that are too vague regarding how these organizations are permitted to operate. But can it be an accident that these new rules come in the midst of the current scandal in which an IRS official, Lois Lerner, admitted that Tea Party groups were being targeted for harassment? It was revealed this week at a House committee hearing, at which new IRS commissioner John Koskinen testified, that an email was found from an IRS official indicating intent to scrutinize 501c4 organizations. How much of this was generated by inappropriate politicized activity within the IRS and to what extent it relates to the IRS taking guidance from higher authority -- like the White House -- remains to be seen. It does defy common sense to conclude that the White House has not been involved in this. IRS activity in pursuit of non-profit organizations escalated in 2010. It so happens that early 2010 the Supreme Court ruled, in the case Citizens United v. Federal Election Commission, that the ban on independent political expenditures by corporations violated the free speech provisions in the first amendment of the constitution. And it so happens funding escalated into 501c4 organizations after the Supreme Court lifted this ban. And it so happens a good deal of this activity has been Tea Party related activity. After the Citizens United decision, the president himself weighed in, expressing his outrage about the decision, indicating his intent to "develop a forceful response to this decision." To the dismay of our president and those with political agendas at the IRS, our constitution permits free speech and allows corporations to use funds to express a political viewpoint. So the IRS is now trying to render inoperative the vehicles that often receive and use those funds -- 501c4 organizations. It is not an accident that if we look around the world, the one thing that uniformly characterizes un-free nations is lack of free speech. Those that love political power hate those who want to question their power and who want to inform citizens and provide a different point of view. This is what the current IRS scandal is about. IRS officials, whose job it is to collect taxes, have abused their power to harass those whose politics they do not like. And this is what the current attempt to shut down 501c4 organizations by rewriting long standing rules by which they operate is about. Free flow of information and free speech is the oxygen of a free society. Every freedom loving American should vigorously push back against this abuse of power by the IRS to stifle free speech. Star Parker is a nationally syndicated columnist through the Scripps Howard News Service, author of Uncle Sam's Plantation: How Big Government Enslaves America's Poor and What We Can Do About It , and president of CURE, Coalition on Urban Renewal and Education (www.urbancure.org). She can be reached at parker(at)urbancure.org. You can find this online at: http://www.familysecuritymatters.org/publications/detail/using-the-irs-to-suppress-free-speech