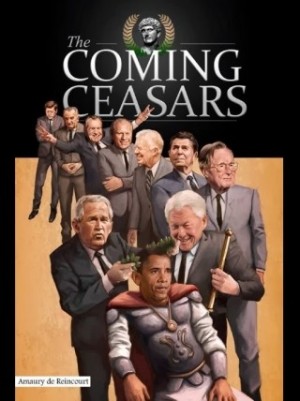 My friend Tim Price of Trestle Press will soon release a reprint of Amaury de Riencourt's classic work The Coming Caesars. Riencourt's book, first published in June 1957, caused an enormous stir in the scholarly world. In October 1957 Newsweek magazine devoted an astonishing ten pages of its weekly edition for the printing of excerpts from The Coming Caesars without any commentary.

Tim's reprint will give the book a new design (see picture left), make it available in both softcover and in digital format, and will serve a new generation of Americans with the caution that throughout history great civilizations built on republican ideals eventually collapse under the tyranny of Caesarism. Tim says he worked to update and republish The Coming Caesars because "there is hardly a book that more accurately depicts what is happening in America. If De Riencourt's thesis was true in 1957, it is far more so today."

I would agree. I've read The Coming Caesars and see in it a remarkable prophecy of America, paralleling what happened historically in ancient Rome. The book is not about politics. It is about human history, the natural laws of liberty, and the psychology of human beings that lead us to eventually unquestioningly follow strong leaders.

De Riencourt's thesis is explained on page 5 of his book:

"Expanding democracy leads unintentionally to imperialism and that imperialism inevitably ends in destroying the republican institutions of earlier days; further, the greater the social equality, the dimmer the prospects of liberty, and that as society becomes more equalitarian, it tends increasingly to concentrate absolute power in the hands of one single man. Caesarism is not dictatorship, not the result of one man's overriding ambition, not a brutal seizure of power through revolution. It is not based on a specific doctrine or philosophy. It is essentially pragmatic and untheoretical. It is a slow, often century-old, unconscious development that ends in a voluntary surrender of a free people escaping from freedom to one autocratic master."

The Coming Caesars is uninterested in promoting party politics, be it Republican or Democratic, but successfully indicts Americans in both parties for allowing the power and prestige of the Presidency to rival that of a Roman Caesar. Riencourt writes "Those who doubt that today an American President might be elected for life should remember that no constitutional amendment, such as was voted after World War II, can stand in the way of public opinion if it truly wishes to elect a Caesar for life." Reincourt traces the rise of Caesarism in Rome and parallels it with the increasing willingness of Americans to follow one man in any emergency, whether it be economic, military, or social. Reincourt argues that this willingness is not political or ideological, but rather it is psychological. It is easier to "personalize" problems and follow a powerful Caesar-like leader than it is to trust increasingly irrelevant legislative assemblies. This, he argues, is historical fact, not political theory.

If this post has sparkedan interest to read The Coming Ceasars, I would encourage you to wait for Trestle Press's re-print of the book which should be available from Amazon in just a matter of weeks. Until then, it would serve you well to carefully read the excellent on-line scholarly review of The Coming Caesars by the St. John Law Review.

Reincourt did not necessarily believe in the inevitability of Caesarism in America. He writes, "Though all Civilizations have chosen the easy solution of Caesarism, man's historical knowledge (today) makes it possible for the first time to avoid the deadly shoals on which every other Civilization has destroyed itself."

In other words, those who do not know history are destined to repeat it.

Here's where you can enter in text. Feel free to edit, move, delete or add a different page element.