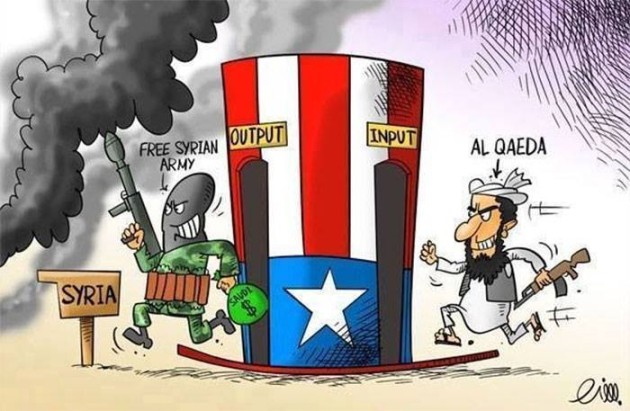 TEHRAN (FNA)Jan 12, 2014-The CIA has a secret program for supporting and training the terrorists in Syria, the New York Times unveiled. Under the administration’s division of labor, the State Department is in charge of supplying nonlethal aid, while the CIA runs a covert program to arm and train the Syrian militants, the newspaper said.

The US officials insisted that no aid would be directly supplied to the Islamic Front, an umbrella for half a dozen rebel groups who favor the creation of an orthodox Islamic state in Syria. Aid would continue to be funneled exclusively through the Supreme Military Council, the military wing of moderate, secular Syrian opposition.

Also in the past 24 hours, a prominent Syrian analyst, elaborating on the cause of Riyadh’s logistical and financial support for the terrorist groups in Syria, said the fate of the Saudi regime now depends on al-Qaeda's failures and successes in Syria. “After the Syrian government’s success in spoiling all Saudi dreams in the region, specially in Syria, the fate of the Al-Saud family practically depends on their proxies in the region, the al-Qaeda group, their other affiliated groups and the Wahhabi thoughts,” Salim Harba told FNA.

He said the Syrian army’s victories against the terrorists have changed all the regional and international equations, specially after it succeeded in unveiling the real identity of the terrorist groups. Meantime, the Free Syrian Army (FSA) held captive more than 100 militants of the Islamic State of Iraq and the Levant (ISIL) in Idlib countryside. The FSA also took dozens of residents of Al-Dana border town captive for cooperating with the ISIL. Also, Syria’s Permanent Envoy to the UN Bashar al-Jaafari said that the Saudi regime is involved in instigating people to terrorism and sending the terrorists to Syria under the pretext of Jihad, including “the sex jihad”.

“Those issues became confirmed starting from the statement of the Saudi foreign Minister Saud al-Faisal who admitted twice in Cairo that Saudi Arabia is arming the opposition… it is a clear confession,” al-Jaafari told al-Mayadeen TV. Elsewhere,

Russia told the United States that it would continue to support Syrian President Bashar al-Assad's campaign against foreign-backed militants.

The remarks were made during a meeting between high-ranking Russian diplomats and US Undersecretary of State Wendy Sherman in Moscow on Friday. Sherman did not address reporters after her meeting with Russian Deputy Foreign Ministers Mikhail Bogdanov and Gennady Gatilov, but the Russian Foreign Ministry said the two diplomats told Sherman that foreign-backed militants are a threat to both Syria's future and regional stability. Elsewhere, the Syrian government managed to stage successful mediation efforts between its supporters and opponents in the three strategic regions in Damascus countryside, bringing the two sides into reconciliation.

The National Reconciliation Committee affiliated to the Syrian government succeeded in bringing the two opposing parties to reconciliation in Harasta, Al-Zobdani and Al-Qaboun after weeks of efforts. The government's mediation efforts were also assisted by outside parties.

Intelligence, Military, Missile defense,Syria, USA, War Rebels embattled against the regime of Syrian President Bashar Al-Assad have reportedly come into possession of high-powered anti-tank weaponry, the likes of which may have been supplied by the United States. Images of rebels equipped with heavy arms have begun to circulate in recent days, and at least one news site has claimed that the source responsible is the US government. On Monday, Israel’s Debkafile website reported that two moderate Syrian rebel militias — the Free Syrian Army and the Syrian Revolutionary Front — have been supplied with advanced US weapons, including armor-piercing, optically-guided BGM-71 TOW missiles, thanks to the Pentagon. According to Debkafile’s report, US Gen. Martin Dempsey — the chairman of the Joint Chiefs — asked officials in Israel last week to help get Saudi Arabian fighter jets stationed at the kingdom’s Faisal Air Base at Tabuk near Jordan positioned in a manner that would provide air cover as American forces moved the weapons into southern Syria. Debkafile attributed the claims to unnamed military sources. Late last month, the Wall Street Journal reported that US President Barack Obama and Saudi Arabia's King Abdullah “appeared to narrow their disagreement on assisting Syrian rebels” amidst a meeting between the two. According to the Journal’s report, Obama administration officials said the meeting ended with the White House agreeing to increase its level of assistance to Syrian rebels. “Senior US officials said their goal is to provide assistance to moderate Syrian rebels not just as a ‘counterweight’ to the Assad regime, but also to extremist elements of the opposition,” Carol Lee and Ellen Knickmeyer wrote for the paper. At the same time, however, the Journal reporters said that the White House made it clear to the Saudis — who reportedly asked for America’s assistance — that Washington was not comfortable supplying certain weapons, including hand-held anti-aircraft missile launchers known as manpads, due to the “proliferation risk” involved with introducing those types of arms into the heart of Syria. The South China Morning Post also cited US officials as saying the Obama administration was considering supplying weapons and has recently “been able to develop deeper relations with the opposition.” Screenshot from YouTube user asim zedan Then over the weekend, a blog that specializes in covering the Syrian conflict published screenshots from just-uploaded YouTube videos alleged to show rebels using the US-made tube-launched, optically-tracked, wire-guided anti-tank missiles. “Until more photos or videos of the missile and possible other locations pop up, it's hard to tell who might have been the supplier. But most likely, the TOWs were indeed foreign-supplied to the rebels,” one blogger wrote. “Since the TOW missiles are made in the US such a transfer likely needs permission from the Obama administration.” Iran’s Fars News agency also reported on Monday that their sources said the US has supplied the anti-tank missiles to the militants fighting against Assad. According to Debkafile, the report — if true — marks “the first advanced US weapon to be deployed in more than three years of civil war.” “Our military sources report that Syrian tank armor is not thick enough to withstand the BGM-71 TOW rockets. To save his tanks, Assad has shifted the brunt of his anti-rebel operation to heavy air force bombardments, which claim a heavy toll among civilians,” Debkafile continued. “Washington is therefore confronted with its next decision about whether to give the rebels sophisticated anti-aircraft weapons as well.” On Monday afternoon, White House press secretary Jay Carney said, “We are going to continue to press in every way we can to assist the Syrian people.” “We are constantly doing is reviewing and assessing what else we can do,” Carney said. “These kinds of discussions, when bad things continued o happen in a place like Syria, always can be reduced to the question of: is the US going to use its military forces to try and do something?” Carney said the administration will assess all options before making a decision based on what the White House believes is the right course of action to take in support of the Syrian people and in support of the United States’ own national security interests.  http://rt.com/usa/us-syria-moderate-opposition-weapons-921