BRITISH Asian crime gangs are behind an explosion in an extreme form of dog fighting.

And investigators are struggling to keep up with the rise of the sick pastime among British-born Pakistani gangs which are also involved in guns and drugs.

Mike Butcher, chief inspector of special operations at the RSPCA, said: "The most serious injuries I've seen have been from fights run by this community.

"You get whole faces ripped off, bottom jaws missing, eyes out, legs broken. The dogs might just be left to fight to the death.

"They don't enforce the rules as strictly as the old school dog fighters who would be very firm making sure dogs weighed the same.

"It's a bit more of a free for all. You've got mismatches which make for a much more bloody fight."

It is thought the gangs inherited their love of the cruel sport from Pakistan where it is legal.
But instead of training the bully kutta breed used for fighting in Asia they import pitbulls, often from Croatia.

The outlawed animals are capable of killing rottweilers within minutes. Once their jaws are locked on an opponent they can only be prised off with a stick or by strangling the beast until it passes out.

In the last two years, 60 British Asians have been jailed for dog fighting, said Mr Butcher.
Up to £20,000 can be wagered on a single fight.

Last November Liaquat Ali, 40, from Accrington, Lancashire, became the first person prosecuted under tougher laws banning organised dog fights when he was jailed for six months.
In October 2007 seven Birmingham men were caged for organising one of the bloodiest and longest dog fights ever.

Two animals died after suffering 124 separate injuries while fighting for hours in a makeshift pit in a kitchen showroom in Alum Rock, Birmingham.
Posted by English kaffir. at 8:29 PM 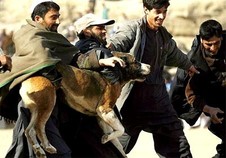 Muslims are at the heart of a dog-fighting epidemic in the UK
http://freethinker.co.uk/2009/07/31/muslims-are-at-the-heart-of-a-dog-fighting-epidemic-in-the-uk

By
Barry Duke
– July 31, 2009Posted in: Islam, The Freethinker
I FIND the idea of organised dog-fights utterly despicable, and regard those who engage in this horrifying pastime as savages who deserve nothing less than having their nuts crushed in the jaws of a grumpy pit-bull terrier.
So it was with gritted teeth that I forced myself last night to listen to a BBC Radio 4 programme uncovering the facts behind a 400 percent surge in dog-fighting in the UK in last three years.
And the culprits are overwhelmingly Muslim – but the politically-correct BBC studiously avoided the "M" word, choosing instead to describe these barbarians as "British Asians" from a Pakistani background.

These men are pictured relishing a dog-fighting event in Pakistan
The programme – The Report – used as its foundation the breaking up of a dog- fighting ring in the mainly-Pakistani enclave of Alum Rock in Birmingham two years ago.
Twenty-six men were eventually convicted for taking part in the largest illegal dog-fight uncovered in the UK.
The RSPCA had long regarded dog-fighting as the preserve of white working class men attending fights in the countryside.
What the fight in Alum Rock revealed, said the BBC, was the first glimpse of organised dog fighting in the Asian community taking place in urban surroundings, wuth tens of thousands of pounds gambled on the result.
Subsequent raids have revealed that dog-fighting has become a problem in some sections of the Asian community, said the BBC
Ian Briggs, chief inspector of the RSPCA's Special Operations Unit said dog-fighting is up 400 percent:
Out of all the work we do 98 percent is Asian.
Mr Briggs said the organisation believes there is a dog fight nearly every week nationally from a small fight in the park to the bigger organised events such as that uncovered at Alum Rock.
Information about one fight we uncover leads to another but certainly we are scratching the surface.
A youth worker from Handsworth said the goal among those engaged in dog-fights goal was to create a perfect fighting specimen.
They're looking for a more exotic dog, more jaw pressure, one which has got more stamina, the drive just to kill, that's what they are looking for, them characteristics people will pay money for. That's where the money's at.
Dog fighting is part of life in rural Punjab and Kashmir and there are fears that its acceptability could be increasing among a new generation of young Asians in the UK aware of fathers, uncles and cousins attending fights in Pakistan.
But forensic psychologist Dr Vince Egan, of the University of Leicester, believes this creates real dangers of a tolerance of cruelty and of lowering ideas of "what is acceptable".
The RSPCA says it is keen on tackling this problem in the British Pakistani community but is finding it hard to penetrate the gangs.
And while the majority of the community find the fights abhorrent, there is among others – as one Asian youth worker explained – certain apathy.
People say 'the dog wants to fight'. I don't believe that at all because it's the human being that's taking the dog to fight. They haven't got a choice about being in that ring.
You canÂ listen to the programme via the BBC iPlayer after broadcast or download the podcast.
On June 29, the BBC reported that man described as a key player in a major dog-fighting scene was sentenced to four months in jail and banned from keeping dogs for life.
Barkat Hussain, 44, from Unett Street, Smethwick, West Midlands, trained pit-bull terriers for fighting and kept related medical supplies.
He admitted keeping and training pit-bulls dogs in breach of a court order.
He had previously been jailed and banned from keeping dogs, following involvement in a mass dog fight.